“No baby girl you are four. Four and a half.

“But Bunny says am five!”

“No baby girl. You will only turn five when your birthday comes. That will be in June.

That was Wednesday. Bunny, my elder daughter was turning six. And because she’s only older than Kajune by a year, then she reckoned that because she is turning six, then Kajune who’s 4, must also be turning five :-).

So Wednesday we held a mini party. We had cake and sang happy birthday. The girls had a nice time eating all those forbidden things that mummy normally says are bad for teeth. 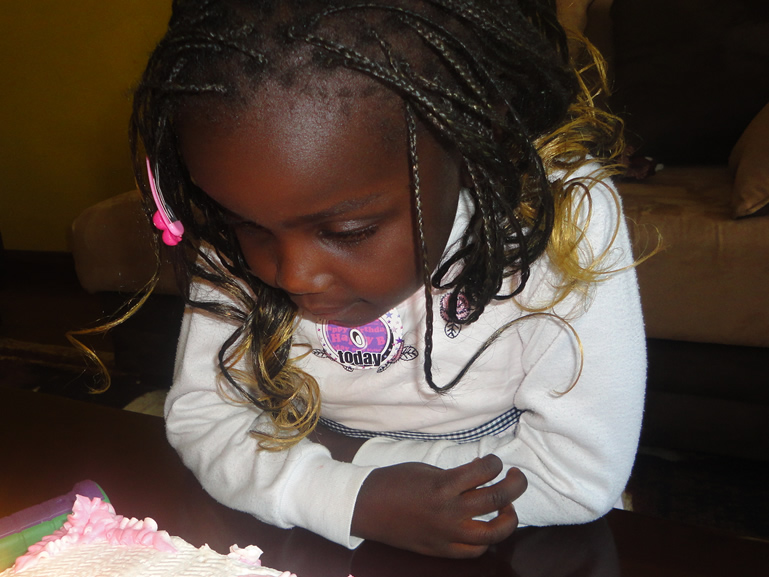 She takes her role as the first born very seriously often by assuming the role of her younger sister’s mouthpiece…which often doesn’t end well or by being the voice of reason……Like when I sometimes joke about handing them(her sister and her) over to be feasted on by lions when they are not eating their supper fast enough….

Bunny doesn’t get the punchline of this joke. She asks me quite seriously where I think I will get other kids if I were to throw her and her sister out to be the lion’s supper. 🙂

But she is a jolly child…

I still remember that night I had Bunny like it is yesterday. I was supposed to go back to campus on January 3rd and my due date was December 27th. But as usually happens babies prefer to stay longer in mummy’s tummy if only a little longer just floating in warm water doing nothing…. So 27th came and passed but no baby was surfacing. What to do? Induced labour. Labour pains are damn painful. Induced labour is quite something else. At some point you just want to DIE. But you don’t, by the grace of God..

Today is my birthday. As tradition, my folks called me in the morning to wish me happy birthday.  They must be nostalgic, i guess.

I am a new years baby. That means my birthday is never forgotten.

When we were little, once, my brother wanted to piss me off. He told me. Today we are NOT celebrating your birthday. We are just celebrating new years. That got me. I ran to my mum crying. She made him take those words back. 🙂

According to eHow , at the age of 27, a woman may be entering a transitional phase in her life. She may be finishing graduate school, advancing in her career or even starting a family.

Cross out ‘finishing graduate school’ and ‘starting a family.’  Those I already did  ages ago. ‘Advancing in her career’, well lets see what the new year has in store..

Today is my birthday. But I spent the day doing math. Cross checking and rechecking figures ….No, I am not an accountant. Infact, I don’t even wonna talk about it. 🙁

This will go on record as the most boring birthday in my life so far.

But the day is not over yet! Maybe it can still be redeemed…

Happy New Year people! May all the good things come your way.