I am a blonde when it comes to football. I am the kind of person who asks questions like “When you say 11 people in a team, does that include the goal keeper”?

My earliest memories of football are my elder brother and i playing football at home. He was a pro. He made sure that i dint ‘touch’ the ball and this would make me furious! I’d threaten him that i wont play with him again and throw a tantrum. I must have been three of four. 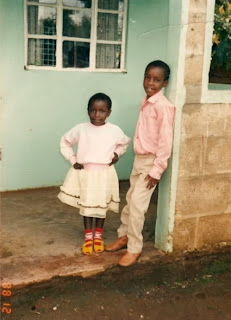 my brother and I

Ironically or otherwise, i happened to meet, fall in love with and, and marry a man to who loves football only a little less(i hope) than he loves his family. Seeing him love football so much made me change from not caring at all to being curious about football. Thus my blonde questions.?

May be its because its the first World Cup to be held in African soil, or it was the exciting posts on the Internet, or maybe because i can’t stop humming the WakaWaka song. More importantly, we were all united in prayers(or was it just me praying?) and hope that we as Africans, would excel if only this one time..

I have watched a few matches in the just ended World cup and almost wept when Ghana lost to Uruguay. I now feel something for the beautiful game. This just ended World Cup has stirred in me some positive emotion to my surprise. The magic that was the first ‘African’ World Cup got me sitting down to watch a football match.

Oh, and i now know what a foul means!

2 comments for “I now feel something for Football”