My theme for 2010 was ‘I will NOT worry. I will let God worry for me…if He ever does!’ I chose that because I found it particularly consoling after how tough 2009 had been. I thank God for the many moments when my heart melted with joy and happiness during the past year.

2010 was a great year for me in many aspects. Here are some of them:

All kids in school – This is a Kenyan mother’s dream, given the nature of Kenyan Househelps (which I blogged about here).  Having all your children in school kinda organizes your life as the parent. With the kids in school you swear that you do not need a househelp…but soon enough you realize it is easier said than done. All in all when all your kids are in school it becomes easier to manage their affairs….and you can sack inefficient househelps rather than put up with their inefficiencies ‘for the sake of the children’ . This year saw Kajune join Bunny to school.

Flying Emirates – I got to fly(at all!) and out of the country for the very first time. I flew to India via Dubai. Four flights, all of which I got to sit by the window and therefore take  loads of photos. Like this one. 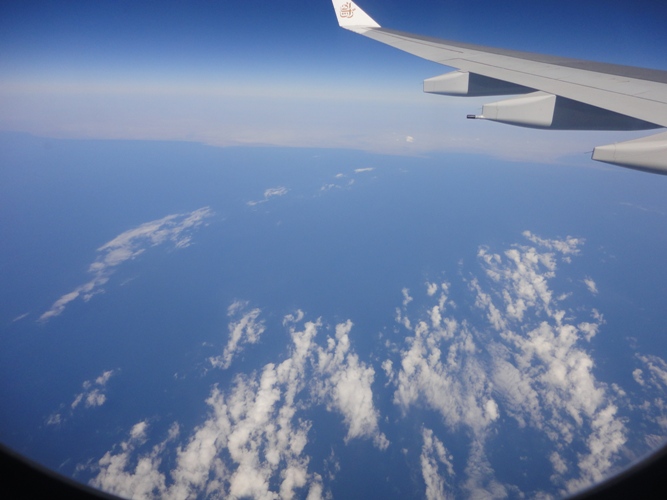 What’s more? I got to stay in this b.e.a.u.t.i.f.u.l hotel in India for a whole six days….don’t even get me started…I have said enough about it here. Man, that was quite something.

Here’s to many more!

Wedding Anniversary 2010 – Last year’s wedding anniversary was the best yet. Ok, it was the second one so you can say it was better, much better than the previous year’s. The day I came from India hubby had us check in at Kentmere Club and the  following day we spent the day lazing around reminiscing  and taking pictures at our wedding reception venue. Winning year – Meet the winner of the top raffle prize during our end of year office party! 🙂  Well, technically it was hubby’s ticket no 63 that won the prize but the fact that it ended up in my kitchen made it my win. It was unexpected and exciting…so much that even though i don’t usually do this, I stayed on and danced the night away. Loads of  fun it was. Nothing like dancing Mugithi at 3:00AM in the morning. Enough said.

Earlier in the year I had taken part in a contest at work and won + I got to pick my own prize!

Discovering the blogosphere – Not only did I discover very interesting blogs but I also started my own blog in 2010. It was heartwarming (still is!) to get very encouraging comments from people I know and people I have never met – readers of this blog. One day, just before this I got featured on Zuqka, one Jackson Biko commented on one of my blog posts. Boy, was I thrilled! I mean Biko is way up there…a literary god. He writes in magazines and in the papers…and he’s reading my blog. I must be doing something right! Then came the day I got featured on Zuqka. After it sank in I was like DO YOU REALIZE HOW AWESOME THIS IS? Of course I was talking to myself. 🙂  Then there was the day an extract from my blog was published in the Business Daily. I stopped breathing. was ecstatic.

I have immensely enjoyed blogging and mrsmwiti.com has become like my third child. I plan to continue nurturing  it and see what it grows into. Meanwhile, I continue discovering other blogs that inspire me greatly.

Mrs Mwiti reads…books! – Somewhere between being a mom and the hustle that is getting a job in this part of the world, I lost my reading streak (I have always loved reading and I prefer reading any day to watching TV). So I resulted to reading magazines – short magazine articles. Now I am getting my groove back, as far as reading books is concerned. I read two books in 2010. Two! Never mind that both of them combined are less than 200 pages. 🙂 Talk about starting small! I read Adah (thought it was Edah!) Adoyo’s She shall Be Called Woman a fast paced 100 pager and the famous Who Moved my Cheese. The latter makes you aware of your own fears, specifically the fear of change and challenges you to face it. In the former, Adah gives practical tips on marriage inspired by her own experiences; both great books.

So what’s my theme for 2011?  Make the best of every situation. I hope that by the grace of God next year at a time like now, I will look back with a smile and say that was a fantastic year.

That is what I am saying now, humbly.